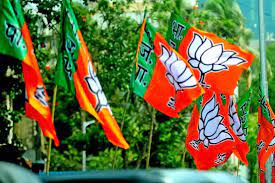 Personal Correspondent: The slogan raised by the Left in the 1960s was, ‘The soil belongs to the plough. The rural farmers of Bengal played a leading role in the Left government for 34 years. Padma Shibir is now following the Left’s strategy to preserve political existence and turn in panchayat elections. Farmers aim to thwart Trinamool Congress in battle to capture rural Bengal. The BJP top leadership has planned to protest against the farmers being cut off in the panchayat elections and reap the harvest. The party has also instructed the Kisan Morcha to jump into the farmers’ movement after the puja.

The top leadership of Kisan Morcha is shaking after getting the order from the BJP top leadership. A special workshop was organized at the five-star resort of Lataguri, Jalpaiguri on Wednesday and Thursday with Kisan Morcha office bearers from West Bengal, Jharkhand, Bihar, Odisha, Chhattisgarh and Andaman and Nicobar Islands.

The delegates from other states in the state gave a lesson to the Kisan Morcha office bearers of Bengal that they can win the minds of the farmers and give them fuel to take to the streets against the Trinamool government.

The BJP leadership believes that farmers have an important role to play in elections in rural Bengal. 60 percent of those who determine the fortunes of panchayat deities are engaged in agriculture. There are at least 72 lakh farmers in the state. 96 percent of them are small and marginal farmers. Trinamool Congress can stop Jayaram if they get their support. At least 14 district councils of North Bengal and South Bengal can be captured. Also, if there is an unexpected result in the panchayat elections, it will not be difficult to win at least 26 seats in the next year’s Lok Sabha elections.

In the words of All India General Secretary of Kisan Morcha, Shambhu Kumar, ‘Due to the non-cooperation of the Trinamool government in the state, the farmers of Bengal are losing the benefits of many schemes of the Centre. The benefits received by the farmers of other states will be transferred to the farmers of the state.

Farmers will be mobilized for the implementation of the welfare schemes launched by the Modi government for food donors in the state.’