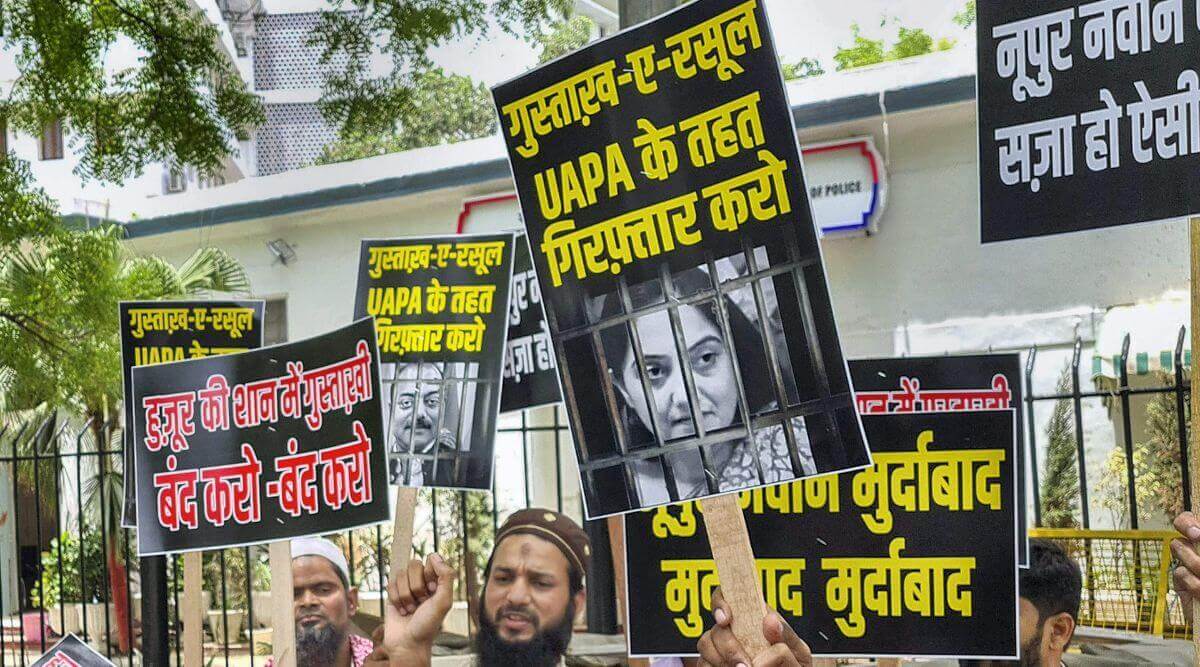 If you think something in the interest of the country, you have a dream for your country and in your thinking India is the best democratic country in the world, then surely you must have been distracted by the present situation of India. Whether you belong to any political party or not is not a question here. Forget these things and think that the heart-wrenching incidents that are happening in the country for the last few days are not affecting your mind and your society? If we mention the past events one by one, then the first mention comes of the two spokespersons of the Bharatiya Janata Party, who unknowingly created such an environment in the country, which had an impact on India as well as many other countries, and due to which our economic and There were social relations, they all fell apart.

Such people were never doing any good to the ruling party, but they were definitely spitting such poison, which destroyed all our living conditions. The same thing comes again and again that unless our society is not fully educated, our country will also not be able to rise above issues like Hindu-Muslim, cow-dung. For these issues, if we look deep inside, we will find that this whole game, all things are done to grab power and all this is not only done by politicians but also done by them.

The national spokesperson of the country’s so-called largest party, while spilling what resentment, what provocation, which knowledge-filled urn, said unrestrained objectionable things to the guru of a particular religion. Commenting on one’s religion, using indecent and derogatory words and arrows towards their religious leaders can be justified under what thinking? By the way, this topic has been churned so much that it does not seem appropriate to say anything about it, but this much can be said that what is the matter after all?

Bharatiya Janata Party’s National Spokesperson (now Fringe) Nupur Sharma spoke on a news television channel on May 27 in the Hindu-Muslim debate in the Gyanvapi Masjid case in Banaras, saying indecent and objectionable things to the Muslim religious leader, which Naveen Jindal accepted. As put on the tutor as well. However, one of these two leaders was thrown out by the Bharatiya Janata Party, while the other was suspended from the party for six years.

It is mentioned that what happened, but after that, not only in the country, but the atmosphere which was spoiled abroad, it has not been cured till now. There were riots in their own country and other countries with which we had good trade and political relations over the years, all called Indian ambassadors, humiliated them and stopped selling Indian goods by leaving their country.

Needless to say, how many Indians are employed in these Gulf countries and because of them, how much foreign exchange comes to the Indian treasury every year in our country. It is not understood whether such lecturers are so eloquent in religion that they open their mouths of knowledge on every subject and even to any religion.

If it is not so then why the so called fringe spokespersons of BJP Nupur Sharma and Naveen Jindal made shoddy allegations against Muslim religious leaders? Are such people free to make such allegations and counter allegations by sitting on the news channel? If not, why didn’t the Bharatiya Janata Party itself make arrangements to send them to jail after registering a case against them.

The anger of Islamic countries is not stopping after the remarks made by Nupur Sharma and Naveen Jindal on Prophet Muhammad. A dinner hosted by the Deputy Emir of Qatar in honor of Vice President of India M. Venkaiah Naidu was canceled for the second day after Qatar’s Ministry of Foreign Affairs summoned the Indian Ambassador.

Vice President of India M. Venkaiah Naidu had arrived in Doha on an official visit. However, it was later reported that Qatar’s Deputy Emir’s dinner with the Vice President was canceled due to health reasons. It was also said that the Deputy Amir has come under the exposure of Corona and this was informed to India even before Venkaiah Naidu reached Doha.

India’s neighboring countries including Pakistan, Saudi Arabia, Kuwait, Qatar and Iran have condemned Nupur Sharma’s remarks against the Prophet. Meanwhile, Saudi Arabia and Qatar have welcomed the suspension action by the BJP on these leaders. By the way, FIRs have been registered against him in many police stations of many states of the country and the police there are camping in Delhi to find him with a warrant of arrest for questioning.
India’s highest dependence on Arab countries is on crude oil and petroleum gas. India is now trying to reduce this dependency. For this, India is taking help from Russia and America.

A large number of Indian citizens are settled in these Gulf countries for work. About half of the 32 million NRIs work in the Gulf countries, who remit money largely to their home country, that is, India. According to the World Bank’s report released on November 2021, India received $ 87 billion in foreign funds during the year 2021.

Of this, a large amount was from the Gulf or GCC countries. Such is the relationship between India and the GCC from a commercial point of view. In the last financial year, India’s fourth largest trading partner remained a standing country. Trade between the two countries increased to $43 billion in 2021-22, from $22 billion in 2020-21.

In 2020-21 it was one billion dollars. Apart from this, India did bilateral trade of $ 1.9 billion with another Gulf country Iran in the last financial year, while in 2020-21 this figure was $ 2.1 billion. It is difficult to say what will happen to these businesses after the souring of relations.

Unfortunately, there is no one today to openly lead the opposition against the government. In the year 1972, there was a leader like Loknayak Jayaprakash Narayan to lead the opposition against Indira Gandhi, but in today’s scattered opposition, there is no leader like Loknayak Jayaprakash Narayan and him to give him the right direction. Yes, Anna Hazare was born for some time, but after a few days he gathered himself and returned.

Now there is only one among the present politicians who have farsightedness and who can take the society along, but the ruling first made him ‘Pappu’ in the public mind through his marketing. Even when its influence could not be reduced, now in the name of money laundering, by conducting continuous interrogation for fifty hours, through the Enforcement Directorate, a lot of effort is being made to defame the society by harassing, harassing and harassing Parliament Rahul. There is no other corrupt country in the country than Gandhi and his mother Smt. Sonia Gandhi. The public has now understood this fear of the ruling party and is now waiting when the opportunity comes, through which it can teach a lesson to today’s government.

(The writer is a senior journalist and political analyst)

FIFA has extended the World Cup starting in Qatar by 1...

Doug Ford got it right with his ‘Strong Mayor’ planMEERI...

Bungee jumping from the railway bridge! New adventure sports in...

‘Gamification’: How 5G rollout will revolutionize gaming in IndiaMEERI News