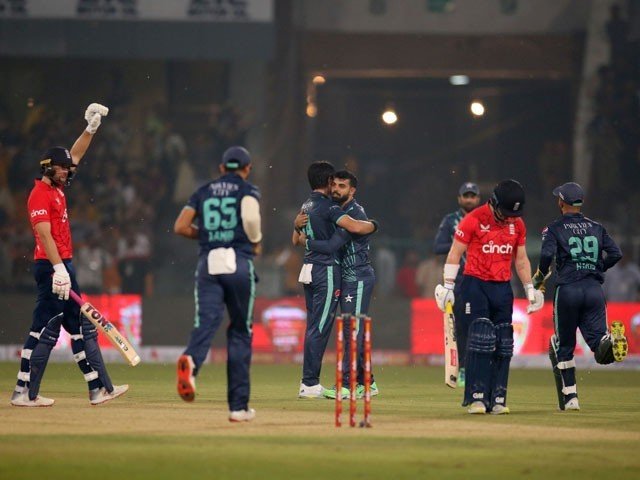 Lahore: (Webdesk) Pakistan is considered to be the favorite in the run of 7 T20 matches against the England team, which comes to Pakistan without many star cricketers. The greenshirts were expected to take advantage of the home conditions to target the guests, but the situation looked different, in just one match, the Pakistani battle line, it should rather be said that the openers Babar Azam and Muhammad Rizwan looked out in full form and aiming for 200 runs. Elsewhere, the batsmen, especially the middle class, seemed to be struggling. Pakistan continued to play with the strategy of saving wickets in the slow start and hoping for a blow later, sometimes success was achieved through the mistakes of the English bowlers or batsmen, sometimes they had to face failure but there was a lack of Continuity in It was seen that after Pulda tied 2-2 in Karachi, the series of games started in Lahore, after which Pakistan got some bad news. Naseem Shah fell victim to pneumonia, later he fell in the grip of the coronavirus, the greenshirts did not feel the need to change the style of battle even at the Gaddafi stadium, after the early departure of Babar Azam, Muhammad Rizwan succeeded one in, the whole Apart from one game in Karachi after the Asian Cup, the uniform course of the Pakistani innings is not a welcome development. In the fifth game the pattern remained the same as in the previous games, Mohammad Rizwan continued to score with a reasonable run rate, none of the others were confident enough to force the English bowlers to wipe the sweat from their brows, the strike rate was low , wickets. They fell more, after giving a goal of less than 150, the chances of victory were very low, but the bowlers managed to pressure the visiting batsmen early on. Die Moeen Ali brought victory close with an excellent at bat . Babar Azam made a surprising decision to surrender to bowler Aamir Jamal, who played the debut match in the toughest situation, which fortunately turned out to be correct. Unexpectedly not conceding 15 runs, Pakistan had a chance to take a decisive lead in the series with a win in the sixth game, but this time there was a very unexpected result. In the fifth game, Mohammad Rizwan was given rest due to swelling from a ball that hit his back while running and Mohammad Haris got his debut. Shahnawaz Dhani became part of the playing eleven instead of Haris Rauf. The good thing is that Babar Azam, who hasn’t played big innings in the Asian Cup yet, carried the burden of expectations except for Iftikhar Ahmed, none of the other batsmen could support the captain for long. None of the power hitters saw disastrous batting, despite the pitch favoring batting, the total of 169 runs was not enough, the way the English batsmen opened the batting was enough to prove that Pakistan What style of batting was needed here No doubt Haris Rauf, a key bowler, was absent, but others have also played international matches and have been included in the national team based on their abilities. Pacers Shahnawaz Dhani, Wasim Jr. and Aamir Jamal saw no cut in their bowling while Muhammad Nawaz also appeared to hit, Shadab Khan bowled slightly better, the difference in both teams’ hitting strategy can be seen in them From the data it can be estimated that Babar Azam’s 87 runs a strike rate of 147.45, while Phil Salt scored 88 runs with a strike rate of 214.63, Alex Hales’ strike rate was 225.00, Ben Duckett’s 162.50 and David Malan’s 144.44. At Australia’s T20 World Cup, aggressive 30 or 40 runs of 3.4 can set the stage for a big score rather than a single batsman’s century. The tempo attack will be balanced, the real problems will be in the middle order, Shan Masood, who has made it to the national team thanks to his achievements in county and domestic cricket, has not shown a single achievement except one fifty. Hyder Ali, Khushdil Shah and Asif Ali got their turn, but none of them could show continuity in a performance. Iftikhar Ahmed does well but was unable to show a dangerous performance, Mohammad Nawaz also did not have the same innings as the match against India. Played, currently the batters and their positions are not determined, changing the circumstances during the tri-nation series in New Zealand will make the batting style better or worse, time will tell, currently the home series against England. Many questions are still left for the green shirts. They don’t have much time to find answers, to solve any problem you have to accept it as fact. strategy will succeed, every Pakistani wishes it will be, but if the wounds are not treated in time, they will get infected, so it is important to work on the visible flaws.