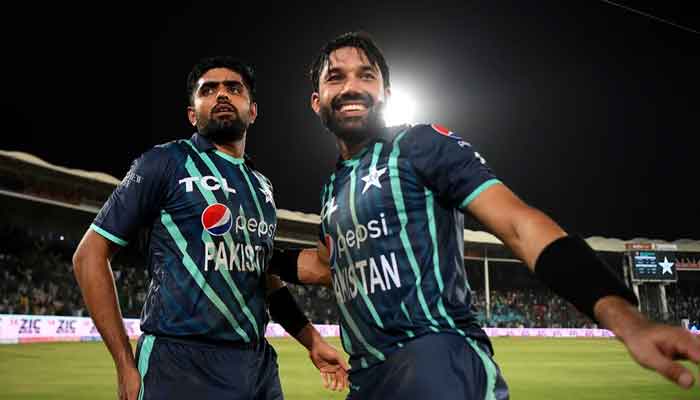 Pakistan scored 203 lossless runs in 19.3 overs after easily beating the England team by 10 wickets to tie the series 1-1 in the second match of the 7 T20I series played at National Stadium Karachi on Thursday . Babar Azam scored an unbeaten 110 runs off 66 balls with 5 towering sixes and 11 powerful fours, while Mohammad Rizwan scored 88 runs off 51 balls with 4 sixes and 5 fours and went unbeaten.

Earlier in T20 matches, Pakistan won by 10 wickets against New Zealand in Wellington and New Zealand scored 166 runs in this match. None of the English bowlers could prove effective. Lockwood and David Vale scored 49 and 44 points respectively. The England team had given Pakistan a 200-run goal to win the match. England team captain Moeen Ali won the toss and decided to bat first and his openers scored 42 runs in the first wicket partnership.

On this occasion, in the sixth over of the match, Shahnawaz Dhani created a sensation in the match by clearing Alex Hales on the first ball of his second over and David Malan on the second ball of the same over, but he couldn’t be to complete the hat trick.

The England team scored 48 runs in their batting power play and two of their players had returned to the pavilion after stepping out. Phil Salt and Ben Duckett made a partnership of 53 runs for the third wicket, while scoring 59 runs for the fifth wicket Partnership In 17.4 overs, in the fourth over from Shahnawaz Dahani, Khushdil Shah dropped an easy catch in the middle of the wicket. Couldn’t be caught. Captain Moin Ali went unbeaten by scoring 55 runs off 23 balls with the help of 4 sixes and as many fours.

Ben Duckett 43, Harry Brock 31, Phil Salt 30, Alex Hales got out by scoring 26 points while Sam Curran didn’t hold out by scoring 10 points Haris Rauf and Shahnawaz Dadhani took 2, 2 for 30 and 37 points respectively in their allotted 4. The players were fired while Muhammad Nawaz got one wicket by giving 40 runs. Mohammad Hasnain and Usman Qadir were unable to get wickets by giving 51 and 41 runs respectively.