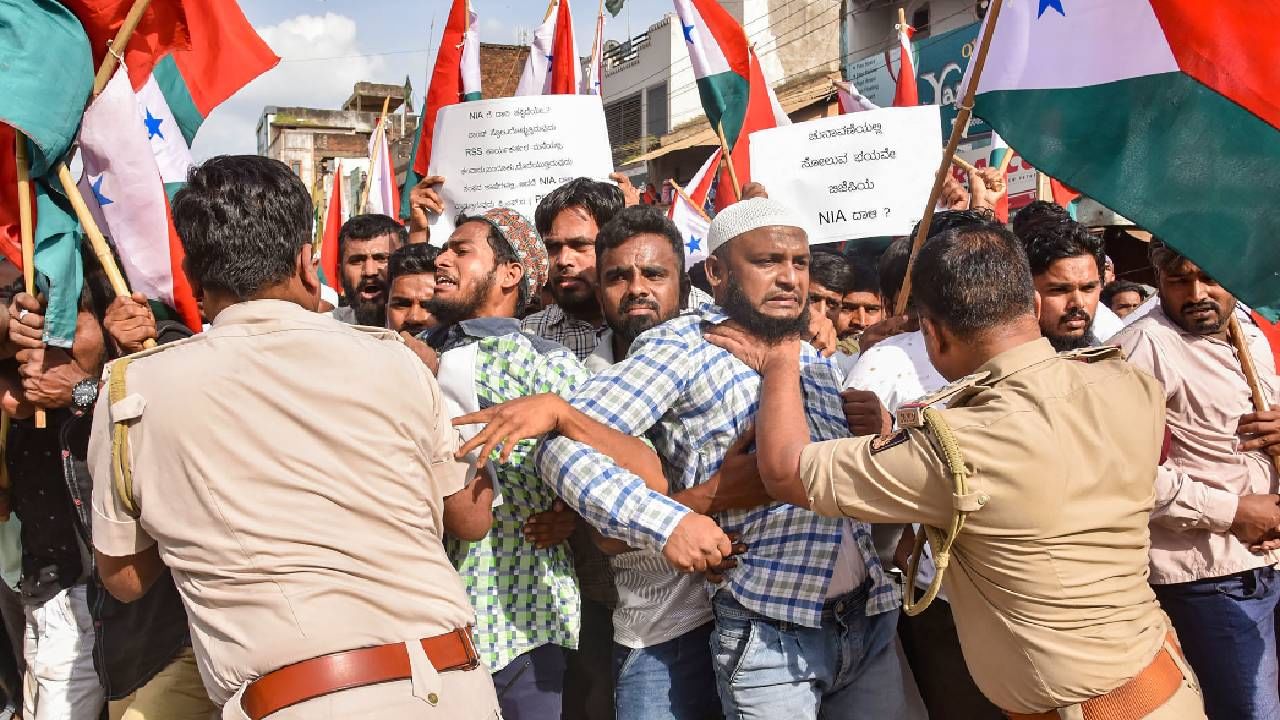 PFI News: NIA and other agencies conducted simultaneous raids at 93 places in 15 states on Thursday. PFI has called a bandh in Kerala today in protest against this raid. Security has been tightened in Kerala.

The Popular Front of India (PFI) has called for a strike on September 23 to protest the raids conducted by various agencies on Thursday at its offices, leaders’ homes and other places led by the NIA. PFI has called a bandh in Kerala on Friday. During this, a car and auto rickshaw have been vandalized in Thiruvananthapuram, Kerala. While in Coimbatore, Tamil Nadu, PFI has demonstrated violently after the arrest of members. During this, the BJP office has also been attacked.

BJP workers allege that petrol bombs have been hurled at his office. After this entire incident, police force has been deployed outside the BJP office. Two policemen were attacked by two bike-borne PFI supporters at Pallimukku in Kollam district of Kerala. Both the policemen were injured in the attack. The police is investigating the matter. These raids by the NIA and ED were done in connection with the alleged support of terrorist activities in the country by the PFI.

The NIA and other agencies conducted simultaneous raids at 93 places in 15 states on Thursday. During this 106 leaders and workers of PFI were arrested. The maximum number of 22 PFI activists were arrested in Kerala. Its president OMA Salam is also among those arrested. The Kerala unit of BJP, however, termed the PFI’s proposed strike in Kerala as unnecessary and urged the state government to take strict action against it.

Security tightened in Kerala, buses will continue to run

In view of the bandh called by the PFI on Friday, the Kerala Police has beefed up security in the state. Instructions have been issued to the district police chiefs to maintain law and order. According to the statement issued by the police, strict action will be taken against those who break the law. Government bus service KSRTC has said that it will continue to operate buses. The Transport Corporation said that if needed, special services will be operated to reach hospitals, airports and railway stations. The Transport Corporation said that if necessary, police protection would also be sought.

BJP’s state unit chief K Surendran alleged that all the strikes called by the PFI earlier also led to riots. He said that the state authorities should ensure adequate security to ensure adequate protection of life and property of the people. He also alleged that PFI is trying to tackle terrorism cases through muscle power and asked its leadership to keep in mind that India is a democratic country and not a religious nation. Surendran said in a statement that despite the high court’s strong stand against unnecessary strike, the Left government in the state is showing a softer approach towards PFI keeping an eye on the vote bank.

In a statement here, the PFI said that a morning-to-evening strike has been called in Kerala on Friday in protest against the action of the central agencies. Its state committee felt that the arrests of the organization’s leaders were part of state-sponsored terrorism, the statement said. A Abdul Sattar, state general secretary of PFI, said a strike will be held in the state on September 23 to protest against the attempt by the Rashtriya Swayamsevak Sangh (RSS)-controlled fascist government to suppress the voice of dissent by using central agencies. He said that there will be a strike from 6 am to 6 pm.

As soon as the news of the raids broke in the morning, PFI workers marched towards the places where the raids were conducted and raised slogans against the Center and its investigative agencies. However, central forces were already deployed at all such places. A PFI source said here that protest marches were taken out in almost all the districts including Thiruvananthapuram, Kollam, Kottayam, Ernakulam and Thrissur.


The raids were carried out mainly at the offices of (PFI) state and district committees and the residences of its office bearers, the source said. Though, initially we thought that the Enforcement Directorate had conducted raids but later it became clear that this was an action of the NIA. The source said that the central agencies have detained 14 office bearers of PFI from Kerala, including national, state and district level leaders. (also from input agency)