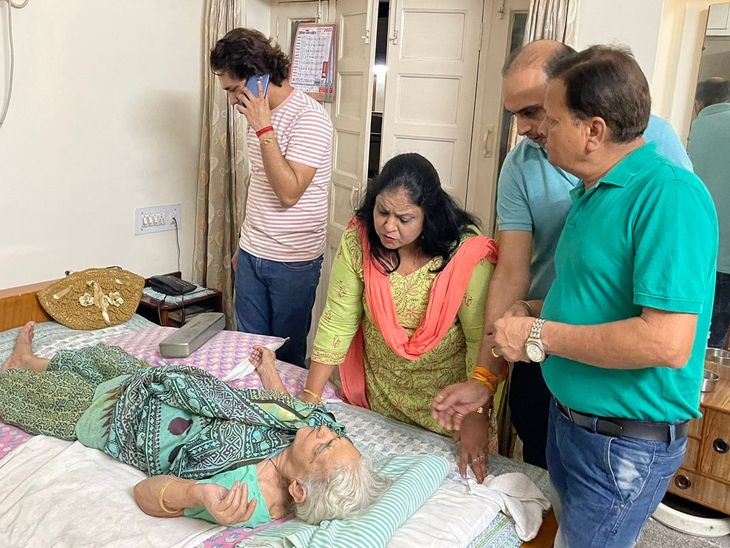 Treatment of an unconscious woman.

Three miscreants, including a servant, carried out the incident by entering the industrialist’s house on Kachari Road in Ajmer. The house was heavily ransacked and the goods were found scattered. Jewelery and cash were stolen. Gunwanti Devi, the mother of insensitive industrialist Anil Jindal, was found unconscious on the bed. They are provided on the spot treatment. At the same time, seeing the condition of the house, Anil Jindal became unconscious. Who has been admitted to Jawaharlal Nehru Hospital for treatment. Police team including CO North Chhavi Sharma, Kotwali station in-charge Sudhir Kumar Upadhyay reached. The police are involved in the investigation of the matter.

Police engaged in investigation after reaching the spot.

Daughter went out, came back and ran away

Daughter Khushi told that she went to drop her father for ten minutes. Then locked it. Krishna, grandmother were at home. Krishna was a servant and hired only two-three weeks ago. When it came early, three people were seen running. Didn’t even get a job. The house was ransacked. Goods and cupboards were also scattered.

Police investigating on the spot.

would have given something to eat

Preliminary investigation is believed to have sedated Anil Jindal and his mother by giving them something to eat and later fled after committing the crime. When Anil Jindal came to the house, he was shocked to see the situation there. Who has been admitted to Jawaharlal Nehru Hospital for treatment.