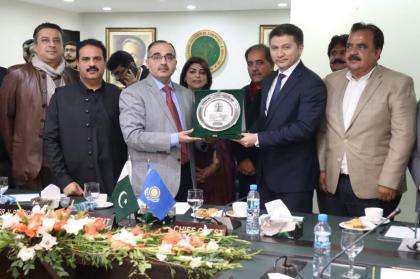 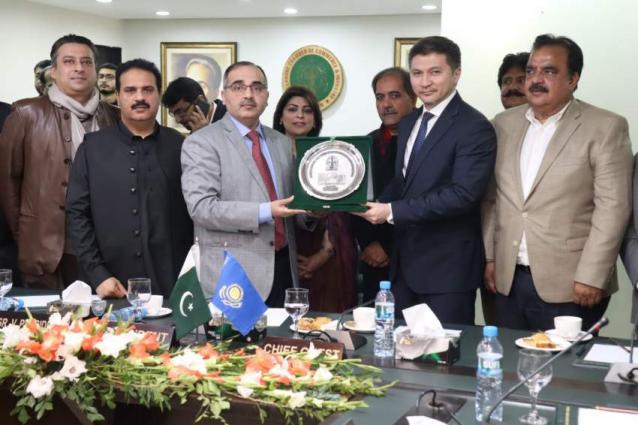 The ambassador said that the deputy prime minister of Kazakhstan led a delegation to Pakistan where they signed a memorandum of cooperation with several banks. We are striving to create a money exchange system, he continued, adding that this year we are starting to offer flights from Lahore and Karachi to Almaty.

He said that we have discovered a technique to simplify the visa procedure. If a member sends a letter from LCCI with their passport and requests to travel to Kazakhstan, we can issue them a visa in no more than five days. He said that the Honorary Consul General of Kazakhstan in Lahore is also qualified to facilitate the visa process.

He added that in order to improve regional connectivity, we have conducted a number of sessions with the national logistics cell and now the NLC will carry out delivery of goods between the two countries. He said that TCS has also established a service for delivery of goods with insurance.

The ambassador said that we are working hard to help business people in order to develop B2B relations which the ambassador described as brothers to brothers.

He said that we are also organizing various sessions to promote business between the two countries. The Presidential Chamber of Lahore has been invited to participate in those sessions which are likely to be organized after Ramadan.

He said that Pakistan attaches great importance to building strengthened trade relations with Central Asian republics, especially Kazakhstan. He said that the two countries have strong diplomatic, historical, religious and political ties, but we have yet to succeed in harnessing the existing trade potential to become major trading partners. I would like to share with you some trade figures to determine the current level of trade and economic cooperation between the two countries.

Kashif Anwar said that however in 2021-2022, we have seen some improvements in both imports and exports between the two countries. Pakistan’s exports reached the level of $108 million and imports also rose to $58 million. This resulted in an increase in the value of bilateral trade to $166 million, which is almost double compared to the previous fiscal year. We need to maintain this trend to further exploit the untapped potential of bilateral trade.

He added that Pakistan’s main export items to Kazakhstan include rice, oilseeds and fresh fruits etc. while imports from Kazakhstan mostly consist of chemicals.

LCCI President said that Pakistan has huge potential to export various products to Kazakhstan. Kazakhstan’s total global imports are over $41 billion. Kazakhstan’s pharmaceutical imports are about $1.7 billion. Furniture imports from Kazakhstan are $705 million, while footwear is $550 million. Speaking of textiles, apparel imports from Kazakhstan are over $478 million. Among other products, imports of edible fruits are close to $465 million. Pakistan can certainly improve its exports to Kazakhstan in these sectors. There is also significant potential for joint ventures in the areas of tourism and energy. Kazakhstan can also benefit from Pakistan’s expertise in the IT sector.

He said that to increase the volume of trade, more tradable items should be identified while keeping in mind the market demands in two economies. Both countries can benefit from strengthening cooperation through regional connectivity with major cities of Kazakhstan such as Almaty, Astana and Shymkent with Lahore and Karachi which are the commercial centers of our country. Joint ventures in the field of oil and gas, petrochemical industry can be a “strategic step” in the right direction.

“We believe that the exchange of trade issues through your embassy can play a helpful role in increasing trade activities between the two countries,” he added.

He expressed satisfaction with the latest developments. Kazakhstan and Pakistan signed nine documents during the last meeting of the Pakistan-Kazakhstan Intergovernmental Commission, which includes six memorandums on the supply of goods to Kazakhstan in March-June 2023. These arrangements will hopefully further strengthen mutual trade ties between the two countries.