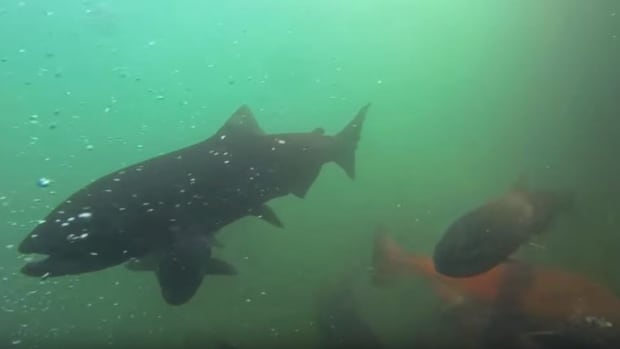 Dozens of people gathered at the Whitehorse Fish Ladder Wednesday for “Salmon Appreciation Night,” but the mood was dampened by the low numbers of Chinook salmon this year.

Only 10 salmon passed through the fish ladder, which bypasses the Whitehorse Rapids Dam on the Yukon River, said Amy Jacobson, fish ladder supervisor. By Thursday, the number was up to 13.

Numbers typically peak in mid-August, and Jacobson is expecting a late push. If the numbers stay this low, it could be their worst year on record.

“If there’s going to be a silver lining, it’s that we have housing,” he said. “If they come, we have a place for them. And that’s our hope.”

The Whitehorse Fish Ladder is the longest wooden fish ladder in the world, and a popular destination for Yukoners and tourists alike.

The fish have one of the longest migration routes in the world, swimming from the Bering Sea to the Yukon River to reach their spawning grounds.

“From the beginning of the Yukon River, off the Bering Sea and Alaska, their numbers were down 90 percent from last year,” Jacobson said.

That stretch of river typically sees between 100,000 and 500,000 Chinook salmon each year. Jacobson says 44,000 chinook were counted there this year.

Chinook salmon hold deep cultural significance in the region, particularly among First Nations, who have fished Chinook for centuries. In recent years, many First Nations have chosen not to fish to replenish stocks.

Paul Josie Vuntat is deputy chief of the Gwich’in First Nation, which chose not to fish Chinook this season. She traveled with her young daughters from Old Crow to Wednesday’s event.

“I grew up on the Porcupine River, which joins the Yukon River,” Josey said. “All I wanted to do today is bring my girls to the fish ladder, to see what salmon are, to learn more about salmon and the Yukon River.”

Choosing not to fish, Josie said, made it difficult to pass on traditional knowledge to her children.

“It’s been part of my culture, my life, my livelihood and my diet for my whole life,” he said.

“It’s heartbreaking that I’m talking about this, because my little girls are so young. They’ve never seen what we’ve been doing for thousands of years.”

The source of the decline is unclear

Scientists are still trying to understand why the numbers have dropped so dramatically. Travis Ritchie is manager of environment, assessment and licensing for Yukon Energy, which operates the Whitehorse Rapids Dam.

He called the low numbers “alarming.”

Ritchie said his scientific colleagues say there are environmental and human factors that could prevent salmon from returning, such as warmer waters, years of overfishing and habitat loss.

Ritchie said Yukon Energy and local First Nations are part of a new task force looking at the operation of the fish ladder and hatchery, located just downstream, for ways to bring the numbers back up.

“It’s affecting people’s emotions, which is what we’re seeing in the environment,” Ritchie said. “I think everyone has to contribute to try and do what we can all do together to try and see if we can make some improvements.”